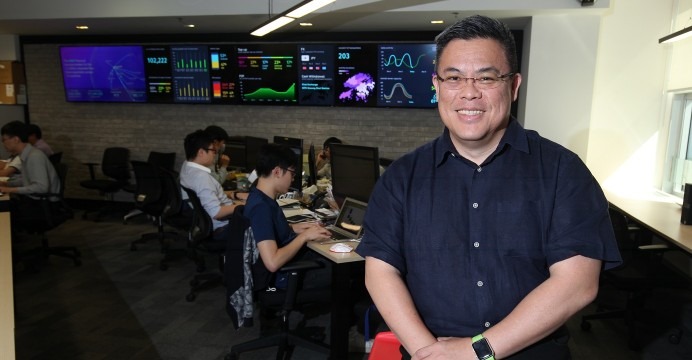 There is a common belief that Hong Kong, despite its role as a top international financial center, is lagging far behind mainland China, Singapore and other major markets when it comes to cashless payment systems.

But many people forget that a local e-payment startup, TNG Wallet, has been around for some time.

Alex Kong is confused why his company didn’t receive “fair” brand awareness in the market after its explosive growth in the region.

As TNG Wallet’s chief executive and founder, Kong created the e-wallet platform where more than 600,000 users in 13 countries and territories, transfer and store their money instantly, 24/7, with no transaction fees.

TNG was founded in 2012, with its e-payment service introduced in 2015. It first worked with 759 stores, its first merchant partner, to offer the “top-up HK$100, free HK$100″ promotion, attracting tens of thousands of new users.

However, since then people’s attention has been focused elsewhere. There were complaints about TNG Wallet breaching users’ privacy, “fraudulent” claims for paying household bill service, as well as the abrupt termination of the top-up service in 759 stores.

“We need to rethink and identify the real pain-point in the market. Who should be our target users?” Kong said. “We can’t earn much from payment services. The primary profit source should be remittance.”

So the question is: which group of users has the largest need to transfer money via TNG wallet? “It would be the domestic helpers offering a steady stream of money remitted to their families in their home countries,” he said.

“The real pain of remittance cost is felt by these people. These are the people queuing up for hours to make a transfer. Moreover, many of them aren’t qualified to open a bank account.”

Domestic helpers account for around 150,000 registered users of TNG Wallet and their per-customer transaction volume has reached HK$4,000 each month. “We have high penetration in this group of customers as they are closely connected to each other.”

This year, TNG Wallet will go regional. “We now have 70 percent of the market share in the Philippines and 90 percent in Indonesia,” said Kong. He said India, Vietnam, Thailand and China are the next target markets for expansion. “Money transfer to China from Hong Kong amounts to US$16 billion each year; our business has huge room for growth.”

Users can now transfer and receive money across the company’s network of 13 countries, 852 banks and over 183,000 cash pick-up points.

At most banks, customers swap their currency at a rate that has been marked up over the live exchange rate. They are also subject to a cable charge and a handling commission. On top of that, receiving banks can also charge their own fee on the transaction.

And it usually takes two to five business days to reach its destination for cross-border transfers via banks.

Kong’s driving principles of TNG Wallet are simple — a disdain for high charges and a belief that customers deserve better and faster service than banks and traditional money transfer agents claim to offer.

There is no foreign exchange markup at TNG Wallet, which charges a fixed handling fee of HK$19, with no minimum transaction amount. The lowest fee across the market is achieved by dealing with the currency wholesalers directly, so its real costs are lower.

Kong said TNG Wallet has built a network of local bank accounts around several regions and countries to send money cheaper and quicker.

Once a user submits the request to transfer money, TNG Wallet will transfer the funds to the recipient using TNG’s local bank account in the recipient’s home country, where it already has funds and pushes a payment from that account to the recipient’s account, which helps to expedite the fast transfer.

“We have sufficient funds of foreign currencies stored in the bank accounts in the countries we operate,” Kong said. The strategy for TNG Wallet is to scale quickly to drive down costs. The company now has over 600,000 customers globally, enough scale to make the business operationally profitable.

Not everyone has access to a bank account, especially those in developing countries, which are TNG Wallet’s expansion target in the future, according to Kong. “The unbanked constitute 70 percent to 80 percent of the population in developing countries; about half of the people worldwide don’t have banking options. We aim to provide financial and banking services to them.”